Since retiring to Ecuador in 2019, we’ve spent our Christmases at the house in Mirador San Jose. This is a lot like glamping at the morgue.

As I think I’ve mentioned one or two times previously, Mirador San Jose is predominantly French Canadian. In their natural habitat, French Canadians celebrate Christmas eve with a réveillon, a 12-hour assault on the liver featuring game meat and hot cheese. This being Mirador San Jose, however, the warring factions are too petrified to venture outside with their merrymaking, lest they encounter an unfriendly from the other team. So they stay in, and it is a very Silent Night indeed.

Chantal and I live in San Clemente now. This is our first Christmas among Ecuadorians. If last night is any indication, we’re in for a treat.

For a village of maybe 2000 people, downtown San Clemente – all two blocks of it – rocks on a Saturday night. Restaurants that are shuttered during the week turn on their lights and open their doors, and the provocative aroma of grilled chicken spills out onto the street. Vendors setup their food carts to sell pizza by the slice, and salchipapa, a kind of Ecuadorian poutine made with sausage meat and fried potatoes, and drizzled with mayonnaise, mustard, and ketchup. (It’s not bad.) There are bars and ice cream parlours and liquor stores, and one discoteca with a karaoke machine.

Around eight, entire families with small children arrive by car or motorcycle to eat and to socialize. Teenage girls come out in their impossibly tiny skirts, and the boys with their pants down around their ankles and hats on backwards. The girls tuck in their boobs and titter. The boys pretend to be gangsters.

Our closest neighbour across the lane, Jessica from Cowansville (my birthplace, for God’s sake), messaged Chantal that afternoon about a tree-lighting ceremony in the central plaza. We wandered into town at six to dine first on shawarma at Pablo’s. He wasn’t open, because Pablo keeps the hours Pablo keeps.

We went instead to Zuah for pizza and beer. Later, we wandered over to the gringo bar where a ska metal band was sound checking for its only set of the night. They performed six songs, and they were very tight. I was ecstatic. I haven’t heard live music in a long time.

All this sets the scene for what turned out to be a charmingly eccentric happening.

Every year, we are told, a few of the townsmen build an enormous Christmas tree from whatever materials they have on hand. This year’s tree is fashioned from painted bamboo, bunches of cello wrap, green tassels, and LED strips. It is approximately eight metres tall.

The tree was lying on its side by the town nativity scene, which is itself an exercise in Ecuadorian whimsy. Along with baby Jesus and His entourage, there are also volcanoes, crocodiles, and a water feature. Nothing says Christmas quite like a plastic crocodile. 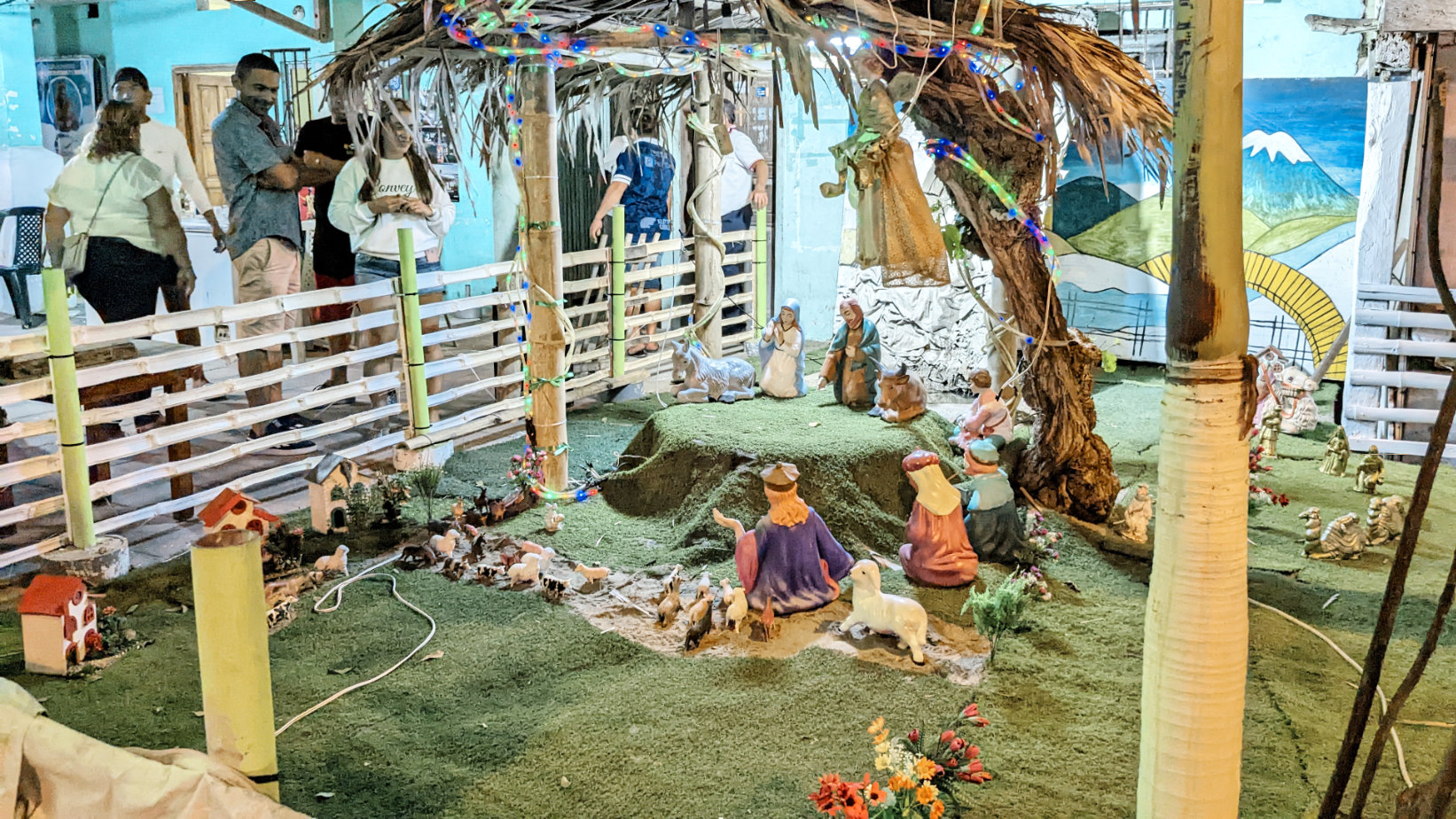 A few minutes after our musical entertainment wrapped up, the local bomberos (firefighters) arrived in their gleaming red truck with sirens ringing and lights spinning. Under their expert guidance, a half dozen men secured nylon cord to the top of the tree, then tossed the free ends – overtop power lines! – to accomplices stationed on the second storeys of three triangulated buildings.

These guys secured their ends around columns – or, in the case of the discoteca, around a bamboo pole. Then, with much shouting and waving of hands, the men on the ground pushed, the guys on the second storeys pulled, and the fire engine inched forward to buttress this crazily perilous activity from collapsing onto the spectators below. 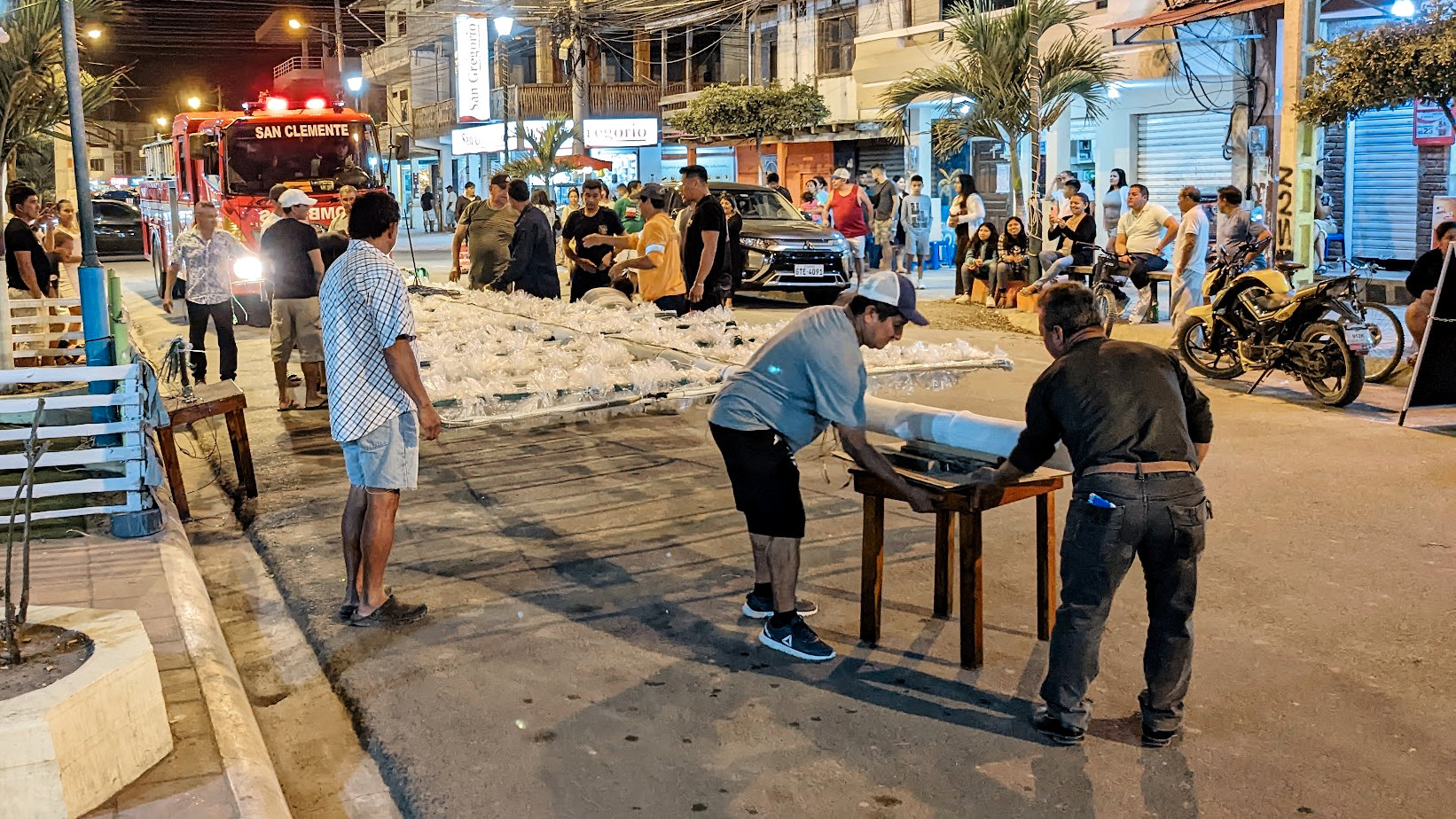 There was a worker with an 18-inch level to make sure the tree was perfectly vertical. There was another tradesman with four strips of wood, a hammer, and some dinky looking nails to keep the tree from shifting once buddy with the level declared it upright. A third individual was busy splicing jury-rigged power cables into a nearby transformer. Because, you know, safety first.

At one organizer’s behest, we counted down from ten, the tree lit up in all its tacky splendour, and a cheer rose from the crowd.

Home for the Holidays

I have a particular fondness for the season. Chantal doesn’t get it. To her, Christmastime is an excuse to spend money you don’t have on stuff nobody needs. She usually says something like, “You’re not even Christian. Why do you celebrate?” I try to explain, but I know my reasons mean little to her. She’s not gushy in that way. But she humours me.

The hanging of evergreen and exchange of gifts at midwinter predates Christianity by centuries. I like the sense of human continuity this ancient festival inspires. I like the social opportunities. I like the feasting. I like the lights and the music – even the wistful Jingle Bells coda that marks every corny holiday jazz tune. When I was a kid, Christmas was when my immediate family became observably less dysfunctional. It’s a memory that stays close to me at this time of year.

After two Christmases stuck inside and away from people, it was a joy to share San Clemente’s tree-lighting ceremony with our adopted community. Ecuadorians do not think of us as outsiders, elbowing our way into their cherished traditions. On the contrary, they treat us as neighbours and are delighted by our presence. I’m grateful for that sentiment.

I miss my boys and our grandkids. Especially the grandkids, with a fourth on the way in about a week. That’s exciting.

But I remind myself we’re home here too, on the sunshine coast, in this funky little beach town, among strangers who are also our friends. 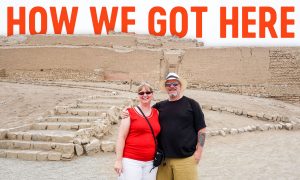 It's an automated email, delivered Mondays at 04:00 ET when there's new content. I won't spam you. Promise.